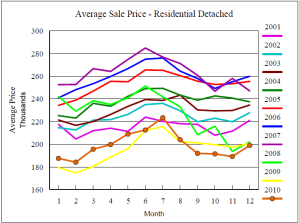 The tax credit which expired in mid-2010 caused a slight lag in the normal seasonal sales and sales price peak which normally happens in June.  This year, it happened in July.  2010 showed promise in the early part of the year, while the tax break was available and home prices climbed slightly.  Once the tax break ceased, however, home prices dropped to the lowest levels in 10 years.  If you think about it, the same home that sold for roughly $285,000 at the peak of the market in 2007 is now valued at $217,000.  In Forsyth County, Georgia the average homeowner lost $68,000 in value.  It’s no wonder home sales are flat, owners that purchased their home in the last 10 years are pretty much upside down.

This entry was posted in Forsyth County, Real Estate. Bookmark the permalink.